Old Narrabundah Community Council (ONCC)  wrote to the ACT Government, seeking a walking and cycling path network between Narrabundah wetlands, old Narrabundah and Jerrabomberra wetlands. This would improve the active transport options for our residents and provide better connectivity between adjoining suburbs and our recreational facilities.
We received a response to our letter from the Minister for Transport & City Services, Chris Steel, that the ACT Government will commence an assessment of the suitability of future pathway connections.
In addition, we were advised that the ACT Government is considering a future separated cycling path aong the northern side of Canberra Ave that would connect the City to Queanbeyan from Bowen Drive through Wentworth Ave and along Canberra Ave.
The ONCC will keep residents informed as these assessments progress.
A copy of our original letter and the Minister’s reply are attached. 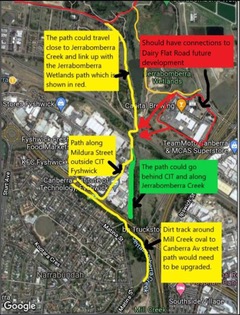 The Old Narrabundah Community Council (ONCC) seeks, on behalf of the local community, to have a better connection from the Narrabundah Wetlands to the Jerrabomberra Wetlands via a footpath network. We consider there would be two stages to this project:

On the south side of Canberra Avenue which is where Old Narrabundah is located a rough dirt track and existing paths already allow a route to Nyrang Street traffic lights and the crossing on Canberra Avenue however a portion of this route is made up of an uneven dirt section that would need to be upgraded.

On the north side of Canberra Avenue which is the Fyshwick side there is a walk/cycle path that extends all the way to Queanbeyan. A new adjoining path could be built off that path which would allow pedestrians and cyclists to easily access the existing paths around Jerrabomberra Wetlands. This additional path could pass along the front or rear of the CIT Fyshwick Campus on Mildura Street and enter the Jerrabomberra Creek zone at the ACTEW AGL CNG Station which is located at the Mildura Street elbow.

If this path is constructed, and has good signage, the many cyclists that now use the Canberra Avenue path to get to work in hubs like Barton and Civic would have the added benefit of being able to access the wetlands areas. This bypass would be a lot safer for cyclists than the “dog’s breakfast” they now encounter from the time they pass KFC at Nyrang Street Fyshwick all the way through Hume Circle and the proposed path would definitely open better access to the Jerrabomberra Wetlands for our Old Narrabundah community.

The future planning of East Basin needs to be taken into consideration in this project which is why we recommend the path be located as close to the Western side of Jerrabomberra Creek waterway as possible, without interrupting its eco system. Locating the path as suggested would negate the need to move it when East Basin development begins.

Since 2004 many reports have included this path/cycle linkage in their concepts (eg East Basin Plan and Jerrabomberra Wetlands 2014 Concept Plan) and the proposal is supported by principles of the current Active Transport Plan.

We have included below a suggested route for these pathways and ONCC ask that you support this project for the community.